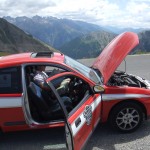 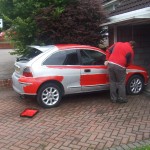 What’s amazing is the car only bloody well went and made it the full 2500 miles without too many issues and is still running. We did the very basics before leaving which included replacing the front disks, pads, changing the oil and putting an air filter in (there wasn’t one when we opened the box). So before we started the  list of issues were no ABS, water temperature guage didn’t work, clutch was on its way out, reverse gear was a bit crunchy and the blower didn’t work on setting 1 & 2. What could possibly go wrong? 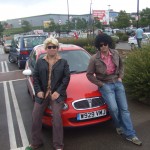 We made it to Dover for our ferry in good time, despite being pulled at customs because the car looked a little “dodgy”, after we asked for a donation to the Childrens Hospital they just waved us through, Andy was disapointed as he was hoping for the full on rubber glove treatment. The fun started the next day on a car park in Bologne as the other cars arrived, it was fair to say we had been majorly outdone on the car decoration stakes. We had failed to understand just how much effort others would have put in, most were just fantastic other just a cool version of crap. Of course we started out in fancy dress to fit with Zebra 3 and our Starsky & Hutch theme. 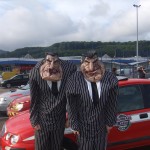 Each day consisted of anywhere between 7 & 13 hrs driving and a number of challenges along the route, thats if you didn’t breakdown. Day 3 saw us dressed as Mafia (Italian Job stylee) and heading across the St Bernards Pass over the alps, Andy has got it into his head that he was Colin MaCrae, how we didn’t cook the breaks and drop of the edge I have no idea. Needless to say when we got to the top of the pass the car was steaming, lifting the bonet showed we had boiled the coolant dry and everything was hotter than the sun.

When we got the car we knew it had been in an accident at some point in its past and repaired but we just didn’t know what had been done. Well the Alps helped us solve that little mystery, as the chassis was obviously bent and the alps rally stage had twisted it some more, the result was the passenger door no longer opened. So from this point on the passenger had to enter the car via the window (very Dukes of Hazzard). 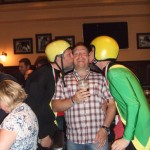 Day 4 took us from Turin in Italy to Monaco, where we drove the F1 track (as much as you can) and watched the F1 race in a harbour front bar, followed by the short blast down to Nice for a party. All in all 6 days of great driving and great company, it comes highled recommended. We raised over £500 for Birmingham’s Children’s Hospital which is great stuff and we already have ideas for next years car or should I say Lancaster Bomber.

6- Nearly getting us T-Boned on a roundabout in France