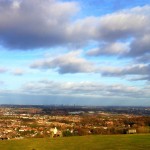 In June last year we moved from the hustle and bustle of Birmingham city centre to the tranquil foothils of the Lickey Hills which is south west of Birmingham but still inside the M42/M5. We have been visting the Lickeys for years both running, walking and picnicing but are still discovering new bits all the time.

The hills had been a royal hunting reserve belonging to the Manor of Bromsgrove. Free public open access began in 1888 when Rednal Hill was bought by the Birmingham Society for the Preservation of Open Space. The Society then presented it to the City of Birmingham in trust. Pinfield Wood and Bilberry Hill were then leased at a nominal rent. Cofton Hill, Lickey Warren and Pinfield Wood were bought in 1920. The final stage in restoring public access to the area was the purchase of the Rose Hill Estate from the Cadbury family in 1923.

The Lickey Hills consist of two parallel ranges with a valley between. The Lickey Hills Country Park of 525 acres (2 km²) belonging to Birmingham City Council and a golf club covers part of the hills. The summits of the Lickey Ridge consist of three hard quartzite hilltops in the higher range – Rose Hill, Beacon Hill and Stock Hill, while the three lower hills are Rednal Hill, Bilberry Hill and Cofton Hill.
If you have not visit the lickey hills then you should, you can get the train to Barnt Green or drive and park at the licky hills visitor centre. The area in perfect for running, walking, mountain biking, orienteering or just a picnic.